Separation, abandonment or ‘left behind’ are words that will scare most of us. These thoughts came into my head as I stood in a Stadtfriedhof in deepest central Germany.

Before me stood two grave stones and a third not in sight but close by of three soldiers of the ‘Great War’. What sparked a reaction in me was not only the iconic design of the white and simple stone of a Commonwealth War Grave contrasting with granite memorials here, but also that the two graves before me were the resting places of ‘Sepoys’ of the Imperial Indian Army.

Sher Dilkhan’s grave was once set amongst similar markers of a lost life. Raghunath Singh’s also remains and can be seen in the distance.

The third is British and lies amongst the tombs of the old Jewish Cemetery situated alongside the Stadtfriedhof.

During World War One soldiers from across the British Empire fought alongside their British counterparts. For instance buried into the ramparts of the Ypres Citadel in Belgium are the graves of Fijians, Canadians and soldiers from Africa etc. within that area, which was known as the ‘Ypres Salient’ are the graves of tens of thousands including long lists of names chiselled onto the Mennen Gate memorial of those whose bodies could not be found, many being comrades of Raghunath Singh of the 9th Bhopal Infantry, Sher Dilkhan of the Indian Army and British Rifleman H Karasek.

Near the Gent Wevelgem pro cycle race route is a small memorial marking the point where the Imperial Indian Army first disembarked at the front line in WW1 to fight for ‘King and Empire’.

The reason why three Commonwealth War Graves lie seemingly ‘left behind’ in this central German cemetery is that Gottingen is a university town which contains numerous hospitals and clinics. It was also the site of the WW1 Ebertal Prisoner of War Camp and Hospital which was big enough to accommodate thousands.

Although the town saw very little fighting in either world war it would have been full of the wounded drawn from all battle fronts from both World wars, and from both sides of the conflict. A figure of 400,000 alone passed through during WW1. The railway station was bombed a few times in WW2 and Herzberger Landstrasse was strafed by Allied aircraft (many Nazi’s lived in this street), resulting in 1% damage to the town and 200 deaths. Thankfully for all when the Wehrmacht pulled out (and with them the big Nazis), the civilian authorities surrendered with no fight. 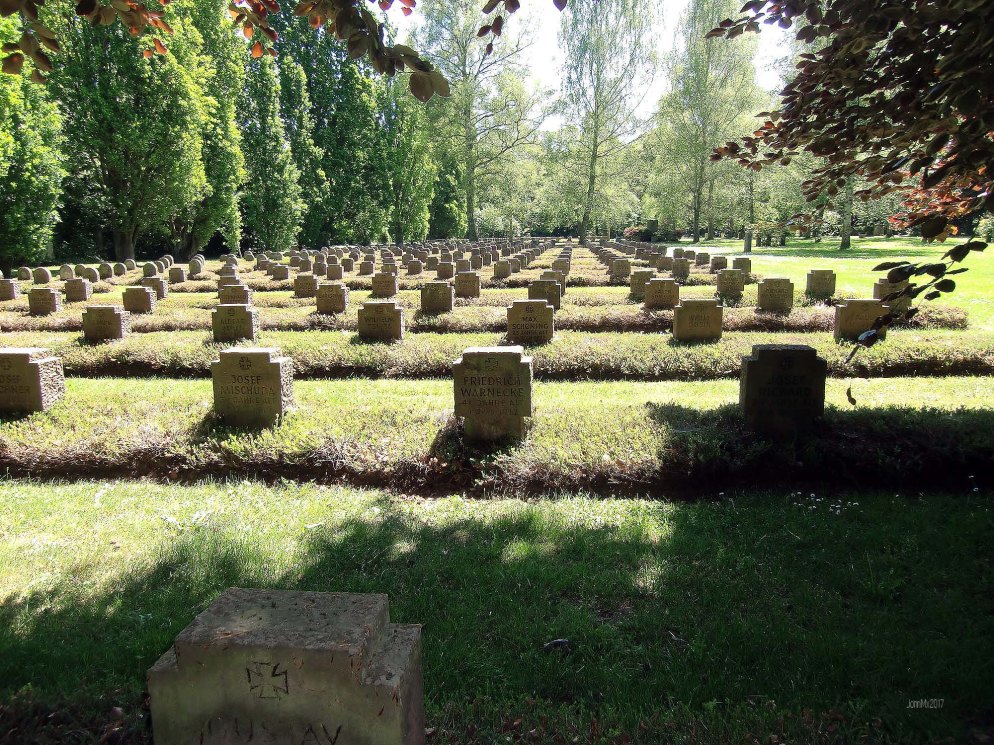 Now, Sher Dilkhan and Raghunath Singh’s grave stones look orphaned and stand apart, separated by some distance and their head-stones jut singularly out of the pleasant park land environment. Flanking them and hidden beneath the earth is the mass grave of unnamed WW1 Russian soldiers (many killed by Cholera), and forced labourers from Belgium, Romania (an allied nation of the Nazis), Czechoslovakia (as then) and Poles buried in the vacated plots during and after World War Two. This is the memorial section of the Friedhof dedicated to the dead of two World Wars and the Terror of National Socialism. In actuality Sher Dilkhan and Raghunath Singh do not rest alone.

Russians, Poles, a Belgian and Czech’s lie in the mass grave hidden below the grass.

Present and in great numbers are the human cost of the Prussian militaristic dominance of German life pre-WW1 and their subsequent military folly. This is strongly illustrated by rows of German military graves from that war; and secondly there are the graves from the Nazi regime and World War Two. These latter graves spill out beyond the dedicated area to line the gravelled pathways of the Friedhof. 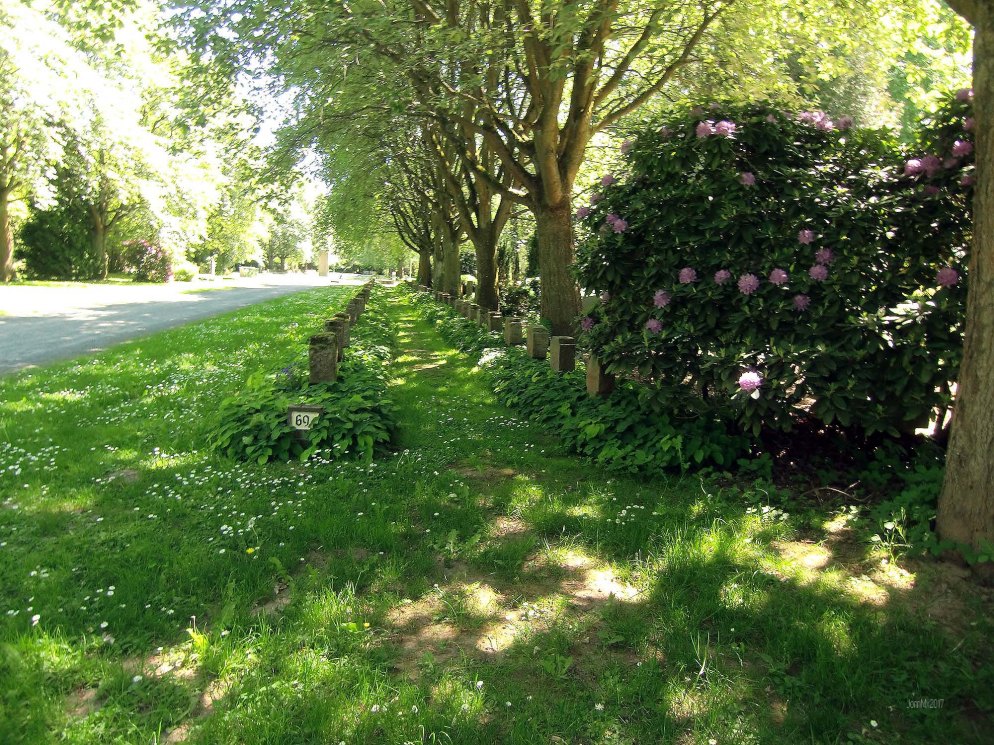 German WW2 dead spill out of the dedicated area to line the gravel paths.

As you would expect the dead of WW1 flow through the years of conflict, but of note are the large number of military dead from the early 1920’s who most likely having succumbed to the flu epidemic which killed hundreds of thousands of war weakened Europeans. Typhus and Cholera were also big killers. The World War Two graves feature a steady cascade of death dates which spike greatly in the final months of the war, with many killed up to the May 1945 armistice, losing their lives whilst fighting to give testament to Adolf Hitler’s thinking – that his people had failed him and it was victory or death, and so it would be death. In a cemetery in Hannover (a short train ride away) is a mass grave of German soldiers executed by the Nazis for showing dissent in regard to the continuation of the war.

In Britain where you often find clusters of Commonwealth War Graves you will also find that a hospital was close by and that many deaths are recorded after the war has long ended, the same can be found at the Gottingen Stadtfriedhof where a good number of German soldiers’ deaths are marked 1946 to 1949. A long lingering release from injuries sustained.

Across the Gottingen Stadtfriedhof are the graves of eight Nobel Prize Winners including Max Planck and Otto Hahn, in addition there are professors, thinkers and the like who made this university town famous. Ironically some who were forced to flee by the Nazi’s who then went on to work with the Allies on the Manhattan Project and other experiments to help defeat the National Socialists.

The most notable Nazi in the cemetery and one who received a state funeral in 1940 is Flugzeugführer Unteroffizier Willi (Wilhelm) Strube and he is easily found as his military gravestone is larger than the rest. It’s also noticeable that the Swastika that marked him as a proud Nazi has been hammered off.

And what of H Karasek? He lies in the adjacent, old, but restored Jewish Cemetery surrounded by fellow Jews from across the decades.

Our three commonwealth soldiers do at first sight seem isolated and somewhat abandoned, especially as two are from a continent and a culture so far away, but they are not alone, they lie in common amongst thousands of men and women also who became victims of war whether from Bhopal, London or Berlin.

A feeling of abandonment like good mental health is different for everyone.

A marker for all victims 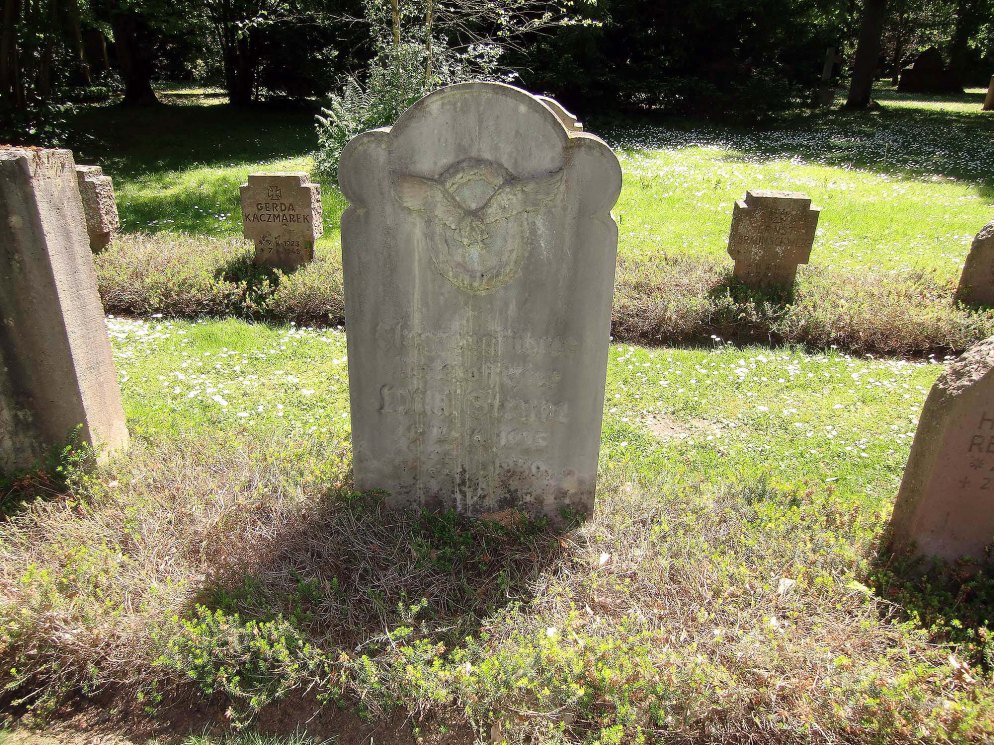 For all the dead